After finding myself struggling more so with getting my soon-to-be 5-yr-old to get up in the morning and to bed in a timely manner… I started to search for a better reward system. I had purchased a behavior clip chart in the past (I just opted to buy a nice one on Etsy because I was short on time and lazy to make one myself), which had made some progress when we first started it – but it just wasn’t enough. See my thoughts on it here.

So I went back on the hunt for something better. I’ve seen all sorts of things floating around for a reward system, star chart, marble jar… all using the same concept of accumulating something in exchange for the behaviors that we want. I like that this is visually more clear to kids their progress and they see what they are working towards (vs. the clip chart that only shows progress).

I settled on iRewardChart Lite on Google Play for Android. 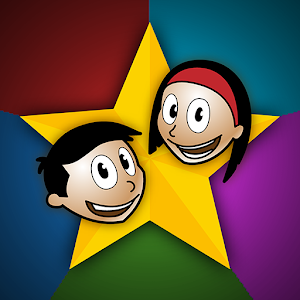 OMG… so far… One week in… this has been a parenting game changer for me. My daughter totally understands the concept – obviously because I know they have a marble jar in her preschool classroom. But I really like it because together, we decided on 4 simple things that I wanted her to accomplish weekly, and then we decided on the rewards that she would like to earn in exchange.

I LOVE that you can earn more than one star in a day and I LOVE that you can lose stars too (red stars). My daughter loves being able to click on the stars herself and track her progress. We talk about how many stars she has, and after a reward, how many she has left, and deciding how she wants to spend the stars that she has earned. Lots of learning opportunities here in my opinion. 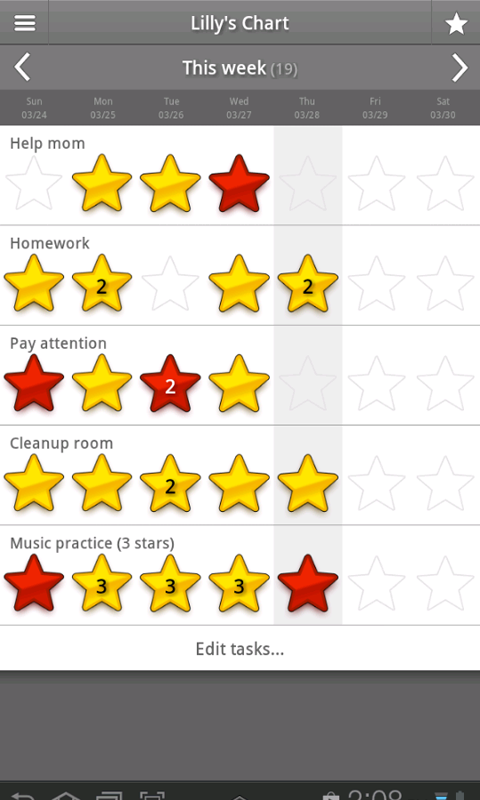 I’m keeping it really simple to start with the following tasks: Sharing, Homework, Getting up on time in the AM, Getting ready on time in the PM. For her rewards, I just settled on a handful of things: A new $2 toy (right now she is trying to collect all the My Little Pony toys from McDonald’s), Extra 10 mins iPad time, A new book, A new iPad app, Movie Night, Ice cream. For the most part, each one is valued at 10 stars for now. As she gets more on point, I might up the value or add more enticing high value items. In fact, her birthday is coming up, and I told her that things she didn’t get off her wishlist, we can add to the reward chart. 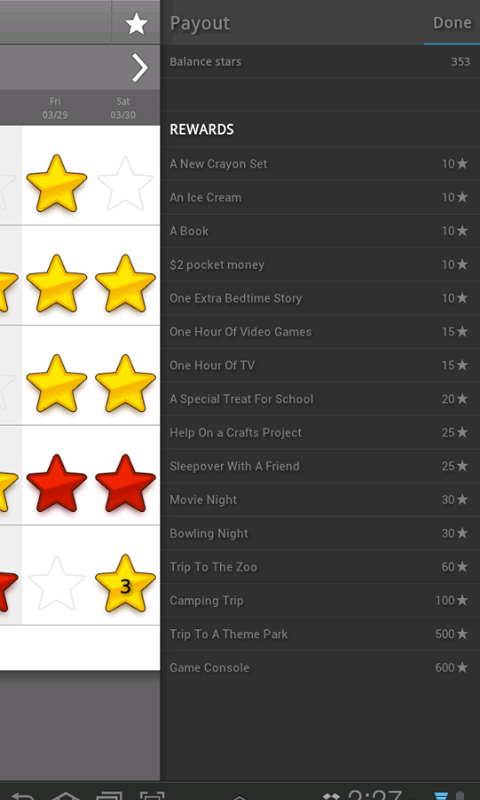 My 2.5 year old is not quite needing this system yet. We are mostly just working on Sharing, No spitting, and Gentle Hands with him. But I ended up liking this app so much, that I paid for the full version ($3.99) and added him so that he didn’t feel left out with the “stars”.

Looking forward to seeing how this app works for us long-term. 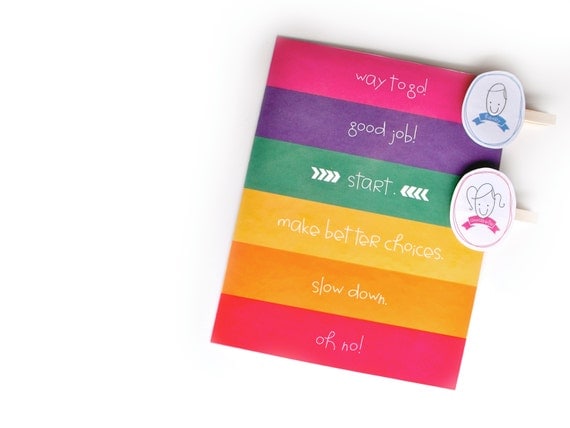 Halfway through the Feisty Fours, I was on a mission to curb some tantrums and all sorts of crazy behaviors that needed to be nipped in the bud! I combed Pinterest for ideas and saw a bunch of various Behavior Clip Charts that people made. I went on Google images and found lots of ideas both parents and classrooms used. There are lots of ways to create your own with just scrapbook paper and printing the wording on your own. Definitely an easy DIY!

However, I was strapped for time and a little lazy to be honest…. so I took it to Etsy and found this super cute Behavior Clip Chart with personalized clips for my two kiddos.

So we implemented this… and to be honest, it lasted well for a few weeks before it failed me. Mostly because we weren’t really diligent in enforcing it I think. But I don’t know…. I also think that it just wasn’t that serious in my daughter’s eyes. Perhaps moving up and down the chart didn’t yield enough reward nor consequence? It might work for some people… and I know they use similar in classrooms… but for us… it didn’t. It’s definitely still stuck on our fridge and perhaps I may find use for this method again at a different age.

Monument! Oooh! A good one from The Daily Post this week for the photo challenge. I spent about 6 years trying to travel around and see different countries… and of course hitting up all the famous monuments. I have so many favorites… which one to choose? Eiffel Tower… Colloseum… So as I read this challenge.. I had a couple of photos pop into my head:

The first one is a funny. Guess where this is at??!?! And no… It’s not a photo of people practicing Tai Chi. hhahaahahah… I was in Pisa and of course I’m taking a photo of the Leaning Tower. Then I turn around and see all these other people doing their “thing” with the Leaning Tower and it just looked pretty funny out of perspective. 🙂

On a more serious note… When I was in Hong Kong, we made the trek to visit the Big Buddha. Seriously, I can’t even describe how big this Buddha is. I had to climb many many stairs to get to the top for a closer look. This photo here was from from the gondola bringing us in. Definitely one of my favorite monuments.

Miss V is about to turn FIVE next month…. *sniff* and then off to Kindergarten she goes this fall. *double sniff*

So as she has been starting to have “homework” assignments from preschool and totally getting into drawing/writing, I’ve been on the hunt for THE desk. For me, I was looking for something simple, modern, dark wood, and little-people sized…. and look what I found!!!!

I fell in love with this KidKraft desk the moment I saw it on Amazon. It looked perfect! But… it was selling for about $168 on Amazon and Walmart too. I had it in my Amazon shopping cart for months and months… until finally this week I found it on Craigslist!!! OMG! And for $100 LIKE NEW. Seriously. I was ecstatic. I picked it up the next day and it was in darn good condition. I must say that its pretty well built in my opinion and perfectly sized for my daughter. She definitely has some room to grow with it. Product info says its recommended for ages 3-8. So I’ll be happy to get a few good years of use with this desk.

Funny thing is… I was definitely more excited about this desk than she was. I mean, she liked it… but the first thing she ended up saying to me was “But mommy, I don’t have a computer.” hmph. I’m assuming she’s just wondering because she sees that the two “big” desks downstairs both have computers on them. 🙂

In any case, once I showed her that she could put whatever she wanted in “her” desk drawer and that she could decorate it with a picture frame… she got into it. I’m going to be in search of some cute desk accessories now. Oh. And I’m still on the hunt for a second one – for my lil’ man.

Thank you Craigslist!!! You came through like a champ!

So only 24 people applied for this job…. even with requirements such as:

Gotta watch this. The ending sums it up. *sniff*

Read more about the story behind this video and job posting.

Thank you Pinterest for showing us that everything sweet is good on a stick! So…. I guess we could also call these “Peep Pops”? Hahhaa. Call it what you want… but they are simple to put together and that’s what I was looking for this week for my daughter’s Easter Party class treats.

I got the peeps at a good time too. Rite Aid sold them at buy 1, get 1. So I only paid $1.99 for the two dozen packs. Perfect since I needed 24 anyways. Combined that with some supplies from Michaels and basic address labels that I printed off my computer.

Then I sat down to watch a show on my DVR while I put everything together. Not bad!

For this week’s Daily Post photo challenge, “threshold” is described as “that point just before the action happens, that oh-so-sweet moment of anticipation before that new beginning.” My mind went instantly to this photo below. It was when I had the honor of documenting my friend giving birth to her daughter. Words cannot even describe what it was like for me in that experience, although I did try to put it into words (with more photos) here. In any case, this photo is all about threshold for me this week. There were all sorts of action about to happen and definitely a new beginning. This is the point where a mother pushes the ultimate threshold.

Street life. I have soooo many pictures of streets, alleys, neighborhoods… lots of things that can interpret “street life” for this week’s photo challenge from The Daily Post. This week I selected a photo from the streets of Essen, Germany. I was there in 2007 when I was chasing The Love Parade – a huge party that takes place on the streets of Berlin typically. After 2006, The Love Parade was forced to leave Berlin… and ended up making its way around different Germany cities in those years following. Obviously, Essen typically wouldn’t be so infested with party-goers and flyers as it is pictured here. But the chalk art on the ground was what struck me: bold and colorful and surrounded by the words “thank you” in many different languages. Pretty cool documentation of Essen’s part in the Love Parade dynasty if you ask me.